Create a series of between six and ten photographs from one of the following options, or a subject of your own choosing:

I tried several different ideas (people waiting for the tram, people with umbrellas, people texting whilst something else was going on), before arriving at my final decision of collecting photographs of people taking photos. I  reached this choice by realising that my favourite shots from my attempts at other themes involved people either taking photos with cameras or with their mobile phones.

Before setting out, I looked at the work of Henri Cartier-Bresson, Eric Kim, Joel Meyerowitz for inspiration on capturing “the decisive moment” in street photography, and Martin Parr for inspiration on humour in photography – particularly in terms of capturing the public in the act of doing something we see every day, but might seem odd to someone who, for example, had never seen a camera phone before.

My images were taken over a period of two days in Nottingham city centre with variable weather of rain and bright sun. I used my Canon 5D mkIII and a Canon 70-300mm lens with a 1.4 teleconverter for most of the shots.  This lens set-up gave me the zoom I needed to frame the subject matter as closely as possible. Photoshop has been used for minor exposure, contrast, sharpening and clarity adjustments, as well as to crop the images more closely.

The final selection of images are as follows:

This image of a wedding photographer patiently waiting for the bride and groom to emerge from the Council House was taken after a downpour of rain.  The image looks very monochrome apart from the vividness of the red of the Canon strap, and the pink bow on the handle of the wedding car’s door. The aperture setting wasn’t chosen intentionally – I had set my camera to shutter priority to take a photo of the bride under the dark shelter of the Council House’s entrance. Shooting from above the photographer

Here, I caught the male showing the female the image he’d just taken.  I caught their smiles as she reacted to the image.  I successfully made use of depth of field to ensure the background was blurred. Adding clarity to the image helped to enhance the red trim on her bag.

Here, I caught a woman taking a photo of her piece of Oreo cake before eating it – a popular hobby of Instagrammers! Being on the same level enabled me to capture the reflection of her orange nail varnish on the back of her mobile phone.  Again, exploiting the zoom lens enabled the background to be blurred, whilst the nails and cake are sharp. 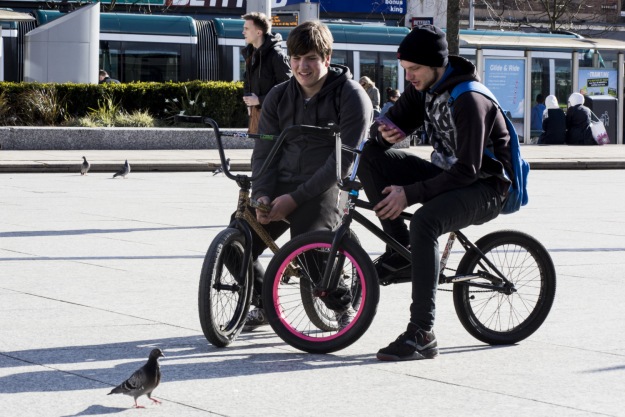 Here, I captured two lads resting on their bikes, one taking a photo of a pigeon using a mobile phone, whilst the other watches the pigeon.  I like that I caught the shadows of the pigeon and bikes and the bright pink of the front wheel trim in the centre third of the frame. The background isn’t as out of focus as I’d have liked.

This image captures a woman concentrating on taking an image of the Council House using her mobile phone whilst oblivious to the fact that a dalek is being wheeled past her (not an everyday occurrence in Nottingham!) The framing of the photo places the dalek as the primary object of interest, whilst the woman taking the photograph appears secondary in the right third of the image.

Another shot of a woman taking a photo of  food before eating it. This one captures the awkward position the woman’s knees are in to balance the doughnut for the photo. I also like the fact the guy on the right who is perpendicular to her has a similar head-down pose as he texts on his phone.  Both are oblivious to other shoppers in the city centre. 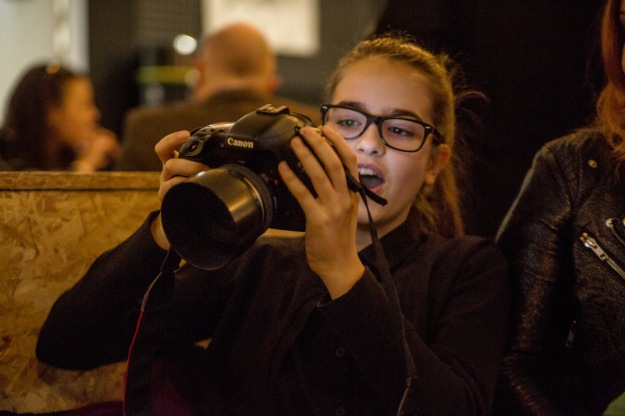 This shot of a young girl in a cafe taking a photo with a fellow photographer’s camera captures the joy of the girl as the image on the back of the camera literally lights up her face. Shooting from the same level enabled me to get the perfect angle as her face lit up as she moved the camera away to see the image she had taken.

As a series, the images captures some of the facets of modern day photography – from the professional patiently waiting for their shot, from the instagrammers taking photos of their food, through people excited to see pigeons in the city centre, to people so engrossed on that they’re taking an image of they miss something as interesting, to the pleasure experienced from seeing an image on the back of a camera screen.

The  use of different shot perspectives adds interest to the series, as does taking advantage of depth of field by blurring the background and keeping the subject matter sharp.

It could be argued that the final shot (Image 7) doesn’t fit the series as well as the others as it’s taken indoors. Equally, Image 3 could be seen as an outlier in that it doesn’t show the photographer’s face. However, my view is that using different setting and framing enhances the series.

My least favourite shot is Image 4 as it shows less technical expertise in using the effects of depth of field.  I’d like to be able to catch a similar shot with a blurred background.  I’ll be bearing this in mind before assignment number 3!

This is Stephanie Webb's learning log for Photography 1: Expressing Your Vision